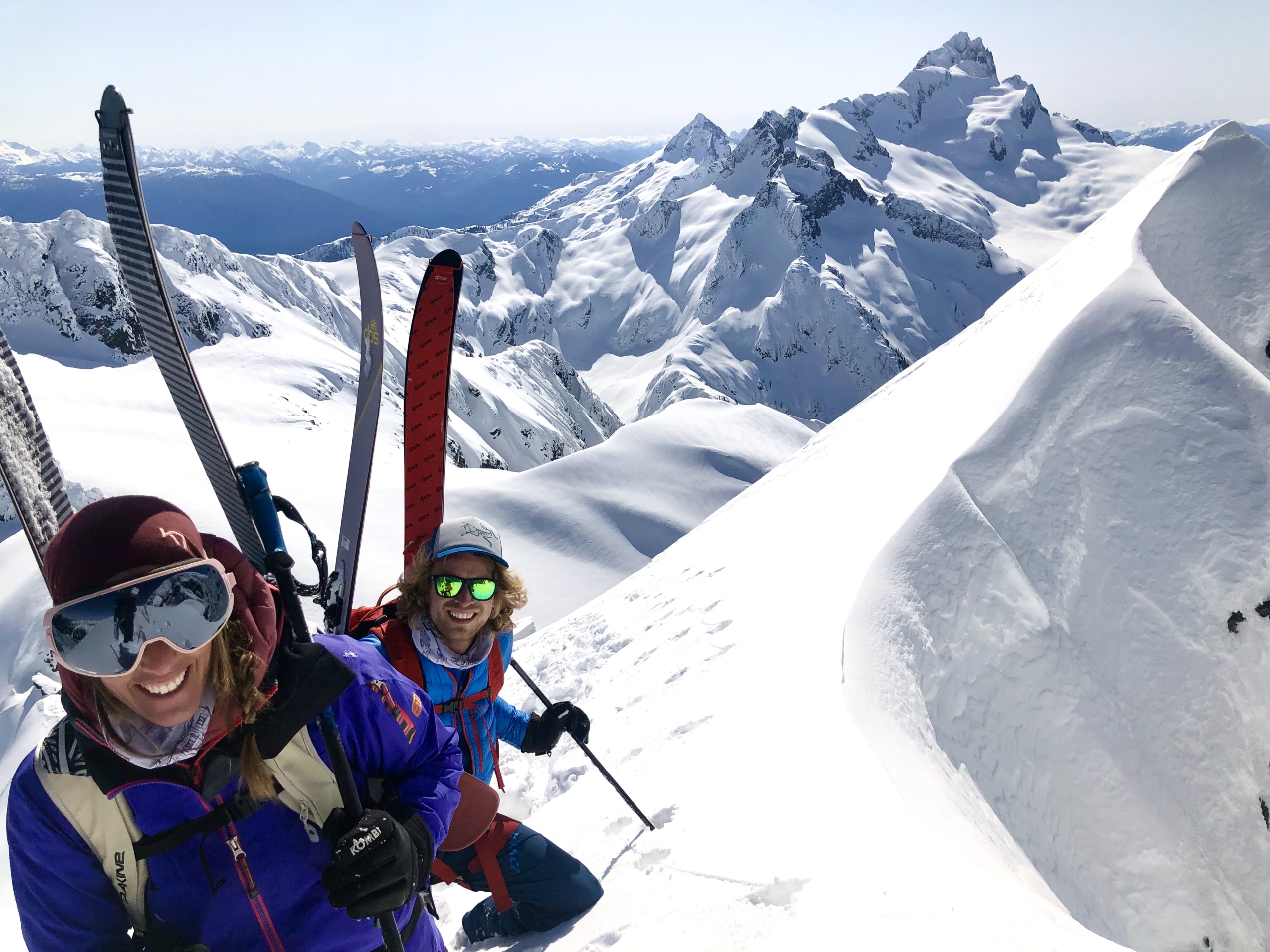 An early April three day Tantalus Range Basecamp and one day of heli assisted backcountry ski touring in the Tantalus Range with Arctos Guides.  A typical spring Coastal storm dumped 25mm of rain in the valley up to 1300m.  There was a significant avalanche cycle to size three on all aspects.  In the alpine there were residual wind slabs in the immediate lee on day one of the trip.  We skied accordingly. 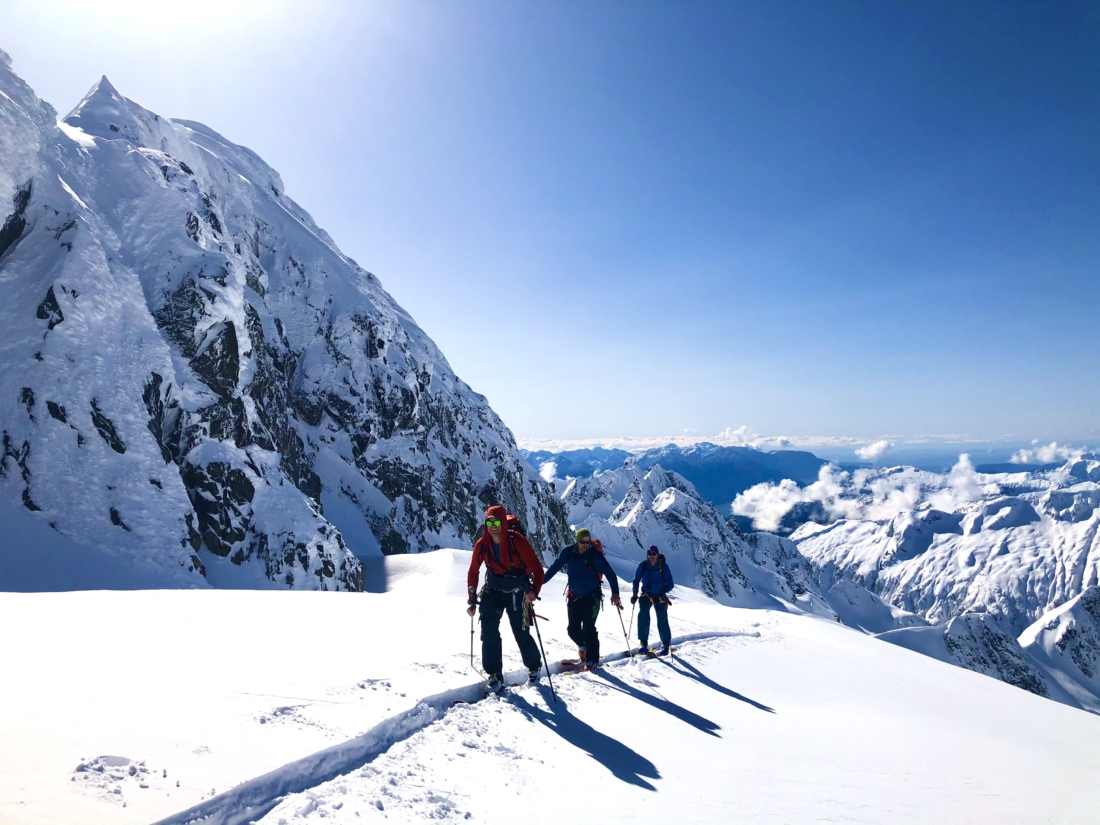 After getting dropped off at the Haberl Hut, we toured up the west aspect of Mt Dione and skied a great run of 10-20 cm of powder on top of a supportive crust.  We toured back up to the ridge and capitalized on an opportunity to practice building T-slots to manage a cornice that was blocking our entrance into our run down the east aspect of Dione.  Evidence of a size two that had run mid storm and no reactivity when we dropped a sizeable chunk of cornice gave us confidence in the stability of the snow on the slope.  The 900m run provided silky pow turns from top to bottom.  We had time to burn another lap and so we indulged before heading up to set up our camp. 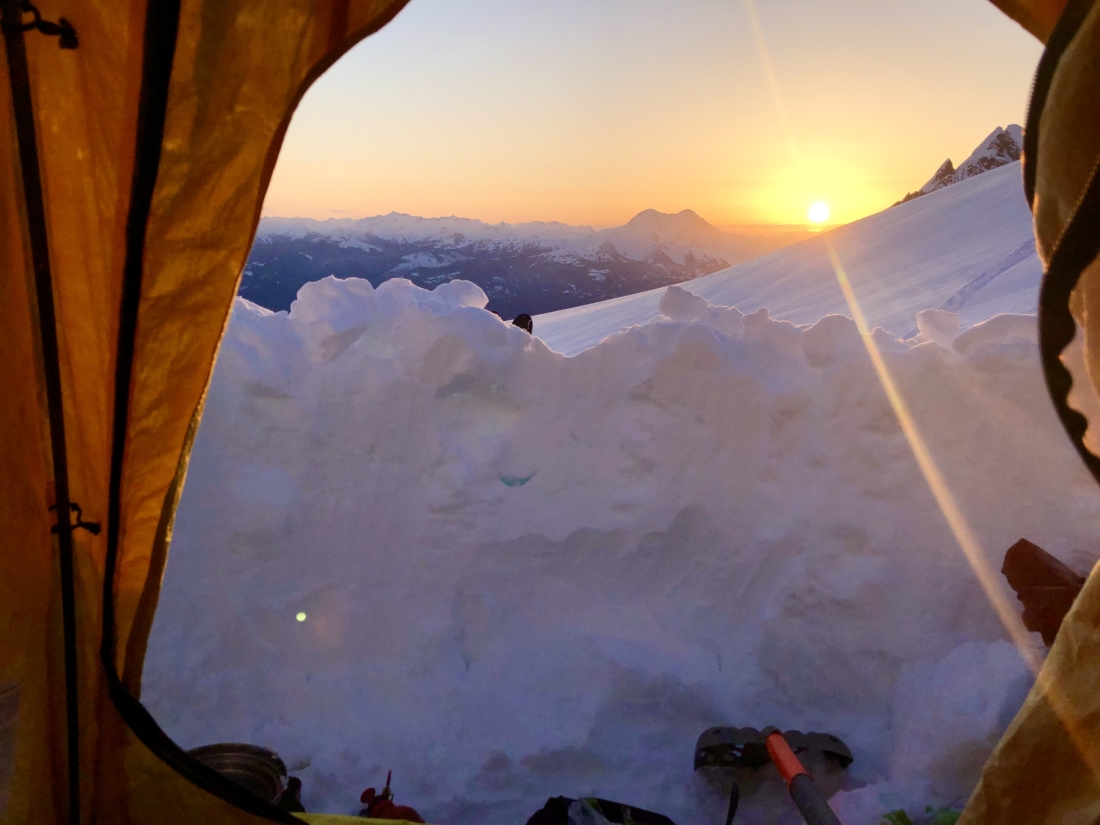 Due to the nature of the Coastal snowpack and the warm temps, the wind slabs had settled out with a bit of help from the clear skies and near surface facetting overnight. 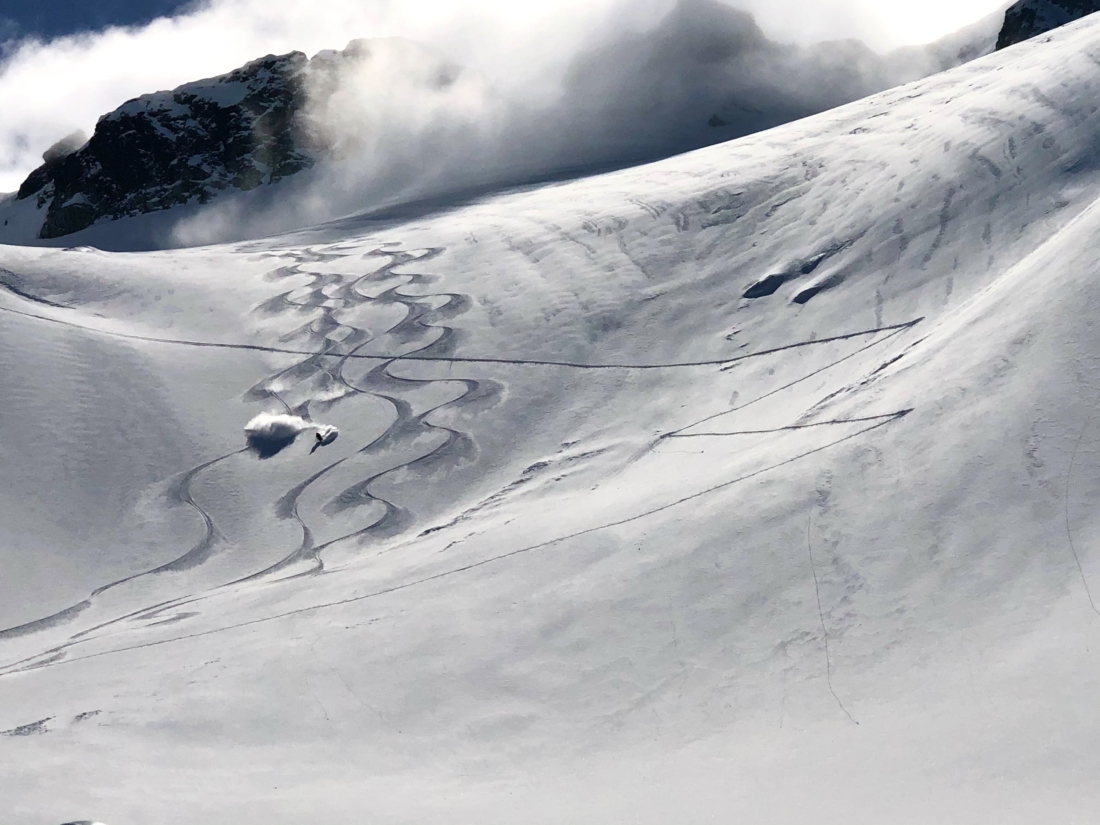 Day two provided another epic day of skiing, with a run off the NE face of Serratus and another one off the West Face of Alpha. 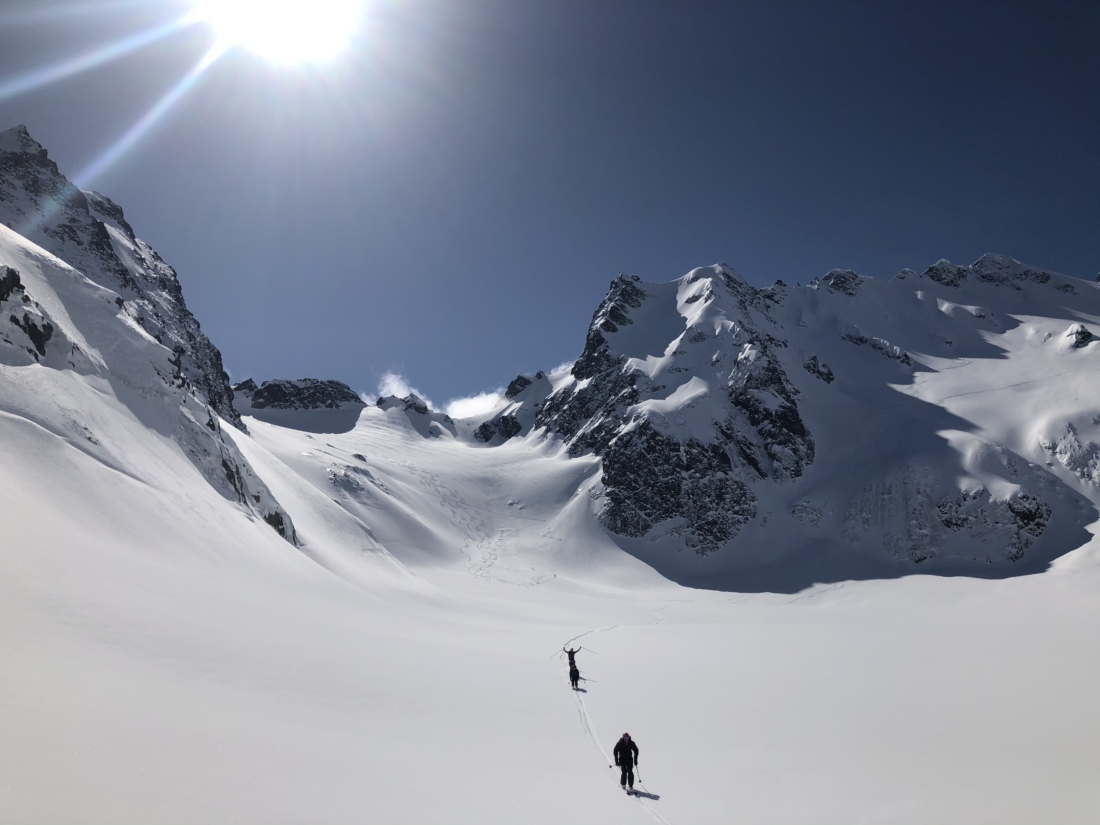 Day three we recycled a similar circuit and added a run on the Little NE Face of Serratus. 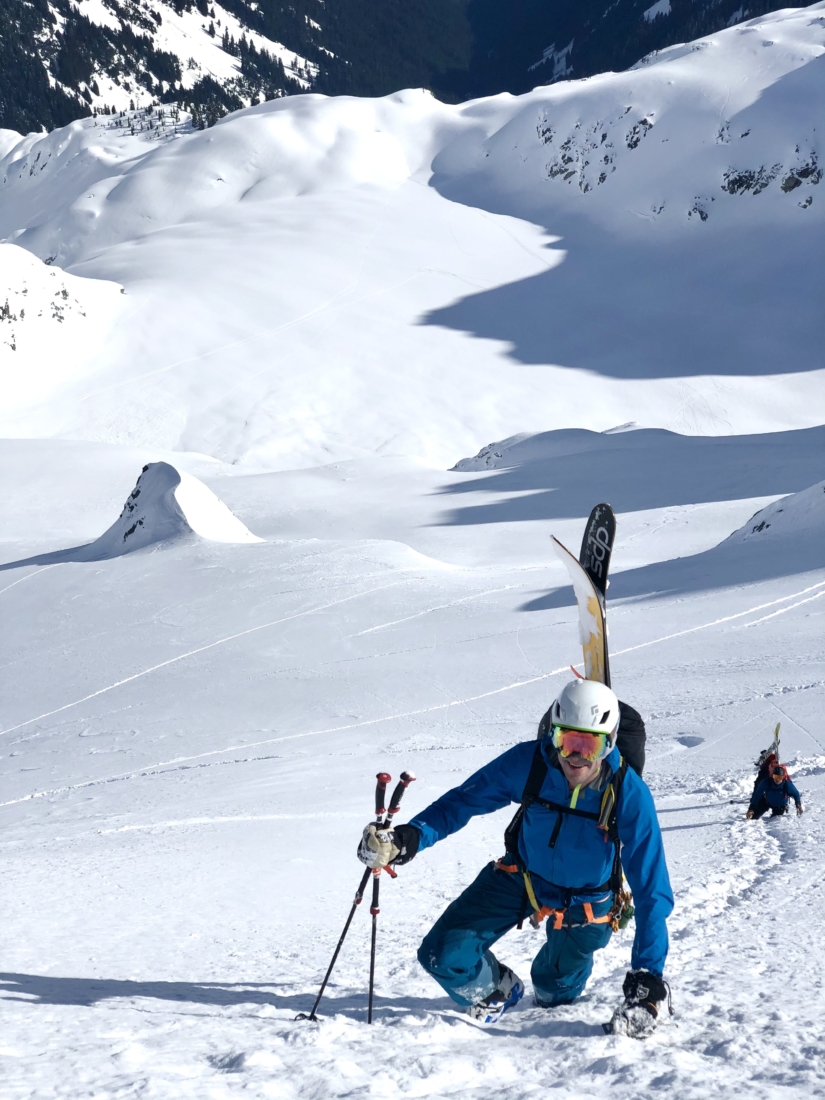 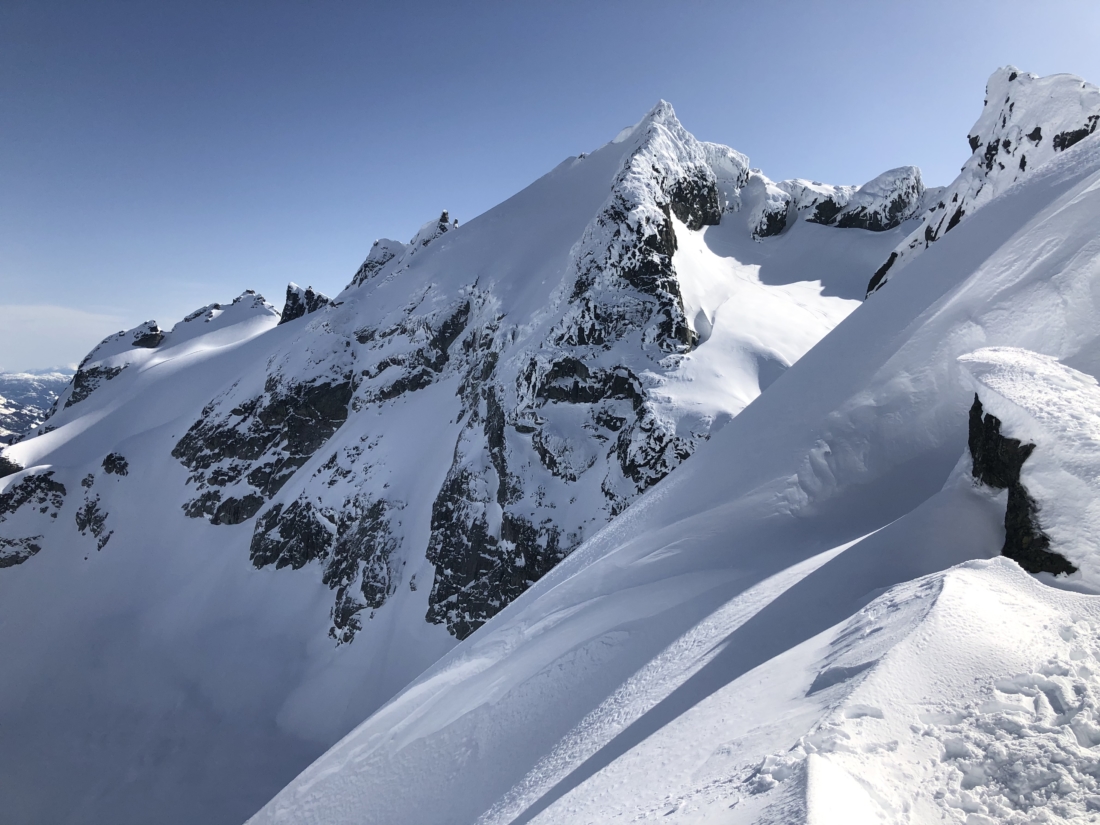 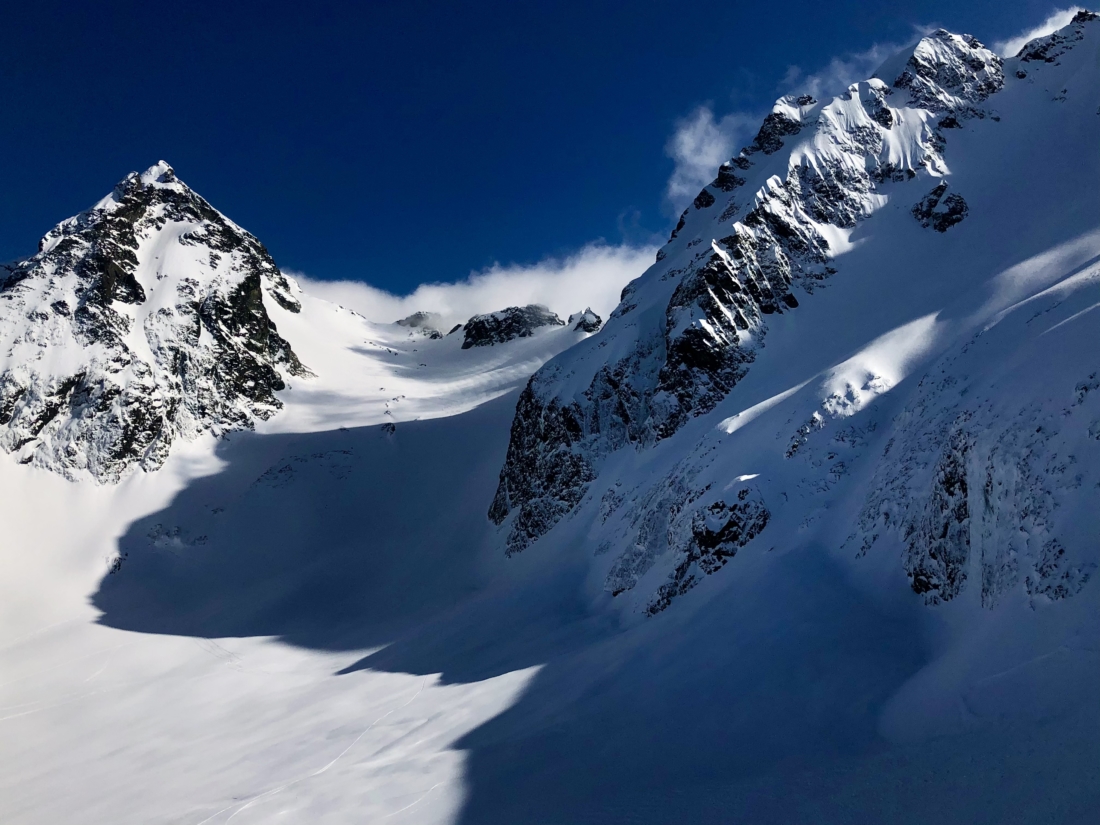 A day later, we went back to the Tantalus for a day of heli assisted in the North end of the range.  We got dropped off outside of the park and toured through a col to the East face of Ossa, a steep spined face plastered with buckle deep pow.  It was too good to resist, so up we went.  Switchbacks turned into a knee deep boot pack up the 45-50 degree face.  Once we gained the ridge crest, we enjoyed spectacular views of Vancouver Island, the Tantalus Range and Howe Sound.  The descent was as good as I imagined, maybe better—perfectly settled styrofoam that slugged away as I surfed the face to the rider’s right. 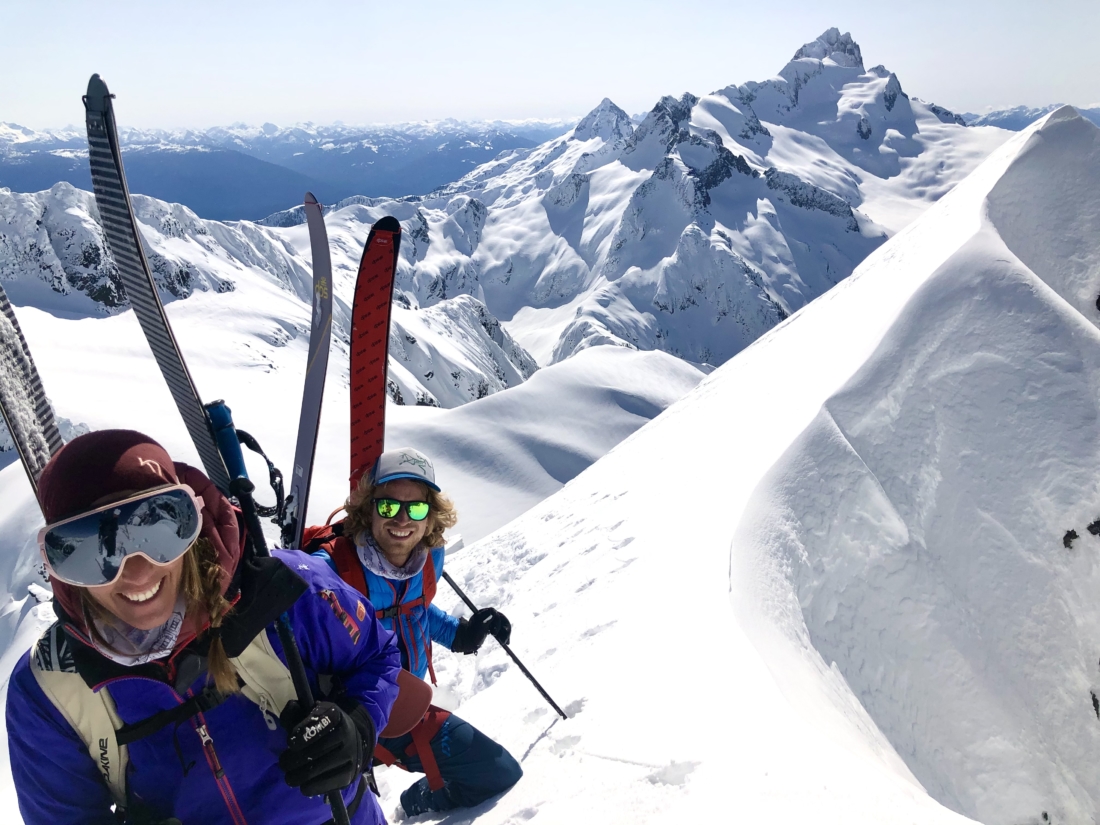 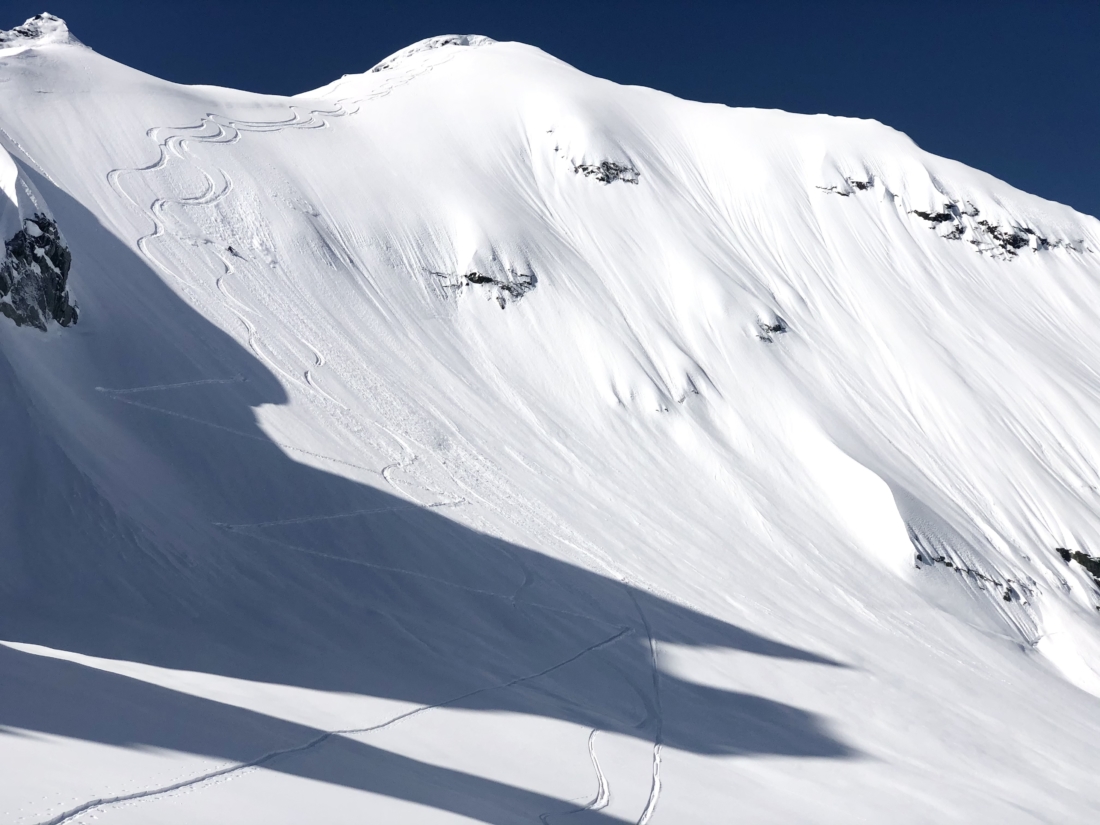 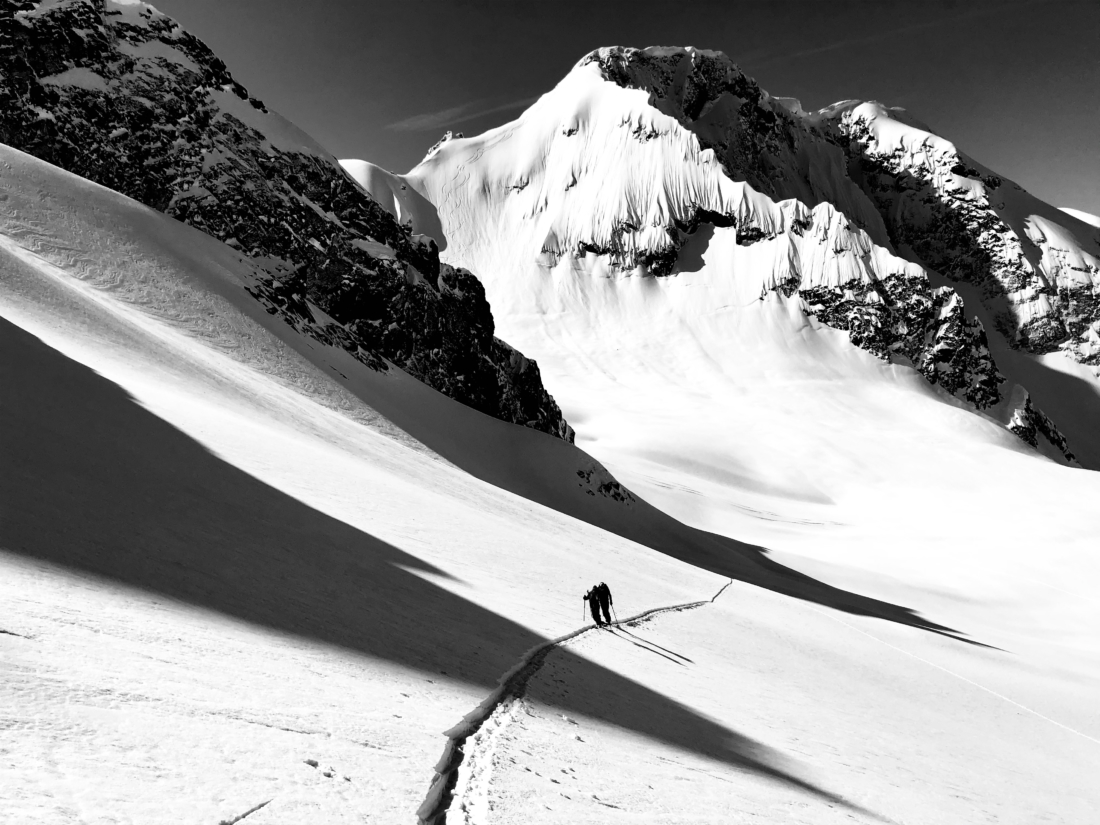 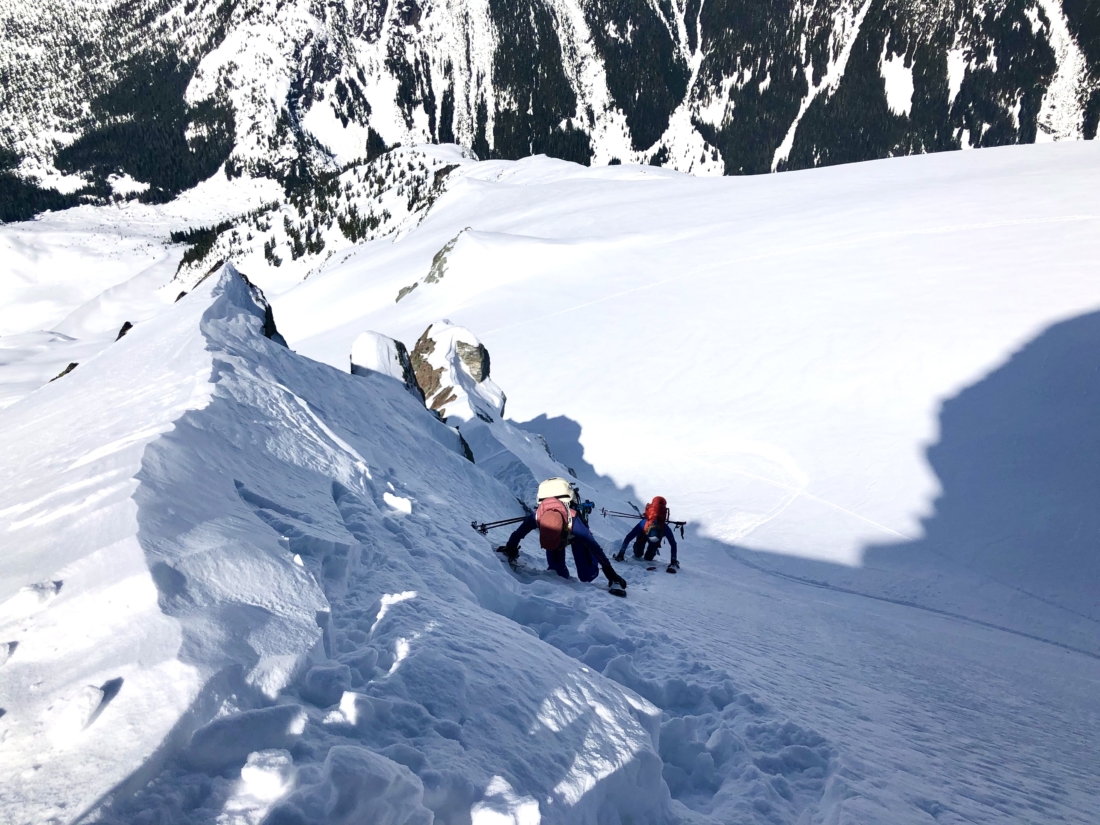 That was run two of a four run day.  For the second near summit of the day, we headed towards the NW face of Pelion—a 1100m glaciated feature built for shredding.  The ascent had several transitions from skins to boots and I definitely earned my wage that day.  The Coastal stair masters of the Tantalus Range delivered the goods.  The planar slope transitions to a massive glaciated roll bifurcated by a rock rib—the perfect venue for super g turns. 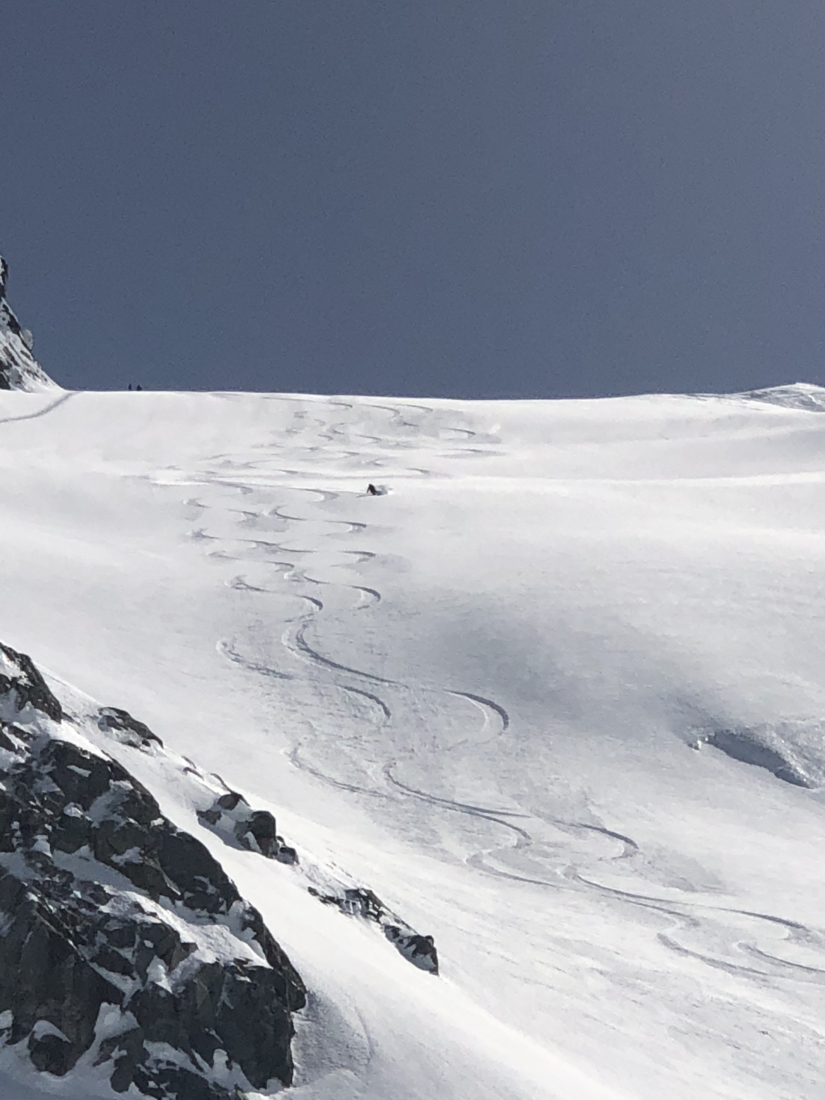 After a quick bit to eat and savouring our turns at a lake below, we headed out of the park for our last run and our helicopter pick up.

If this sounds like a trip that would interest you, drop us a line and we’ll set something up!